FIM F.lli VILLOSIO was born thanks to Giuseppe Villosio in 1894 in Villanova Solaro, a small village in the rural area of the Saluzzo region. 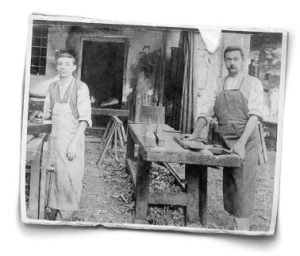 Initially, in light of the company’s location, production was focussed on the manufacture of barn doors and locks; this also due to the fact that, at the end of the 1800s, a furniture culture did not exist, particularly in a rural village like Villanova Solaro. This activity carried on until the end of World War I when production shifted towards the manufacture of crates for ammunition.

It is only at the end of World War II that the company’s production turned towards the creation of furniture pieces as this was a time that favoured development.

In the meantime the founder’s sons, Pinin, Domenico and Carlo joined the business, bringing the company recognition for their Baroque-style creations using Italian walnut.

This product line was to become the company’s most famous until the end of the 80s. In the meantime, Domenico’s sons, Giuseppe and Giancarlo (the current owners of the company), took over the reigns of FIM and began searching for new international markets due to the decrease in demand for Baroque-style furniture.

They looked to expand in the nearby French and Belgian markets and, as a result, the company grew to a maximum of 56 employees.

Then, the economic situation in the following years resulted in the company concentrating all its efforts on the local market, which had in fact never been abandoned, increasing the company’s presence in regional shows and exhibitions (Expo Casa, Saluzzo exhibition). 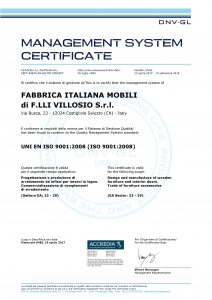 This was done to officially certify the extremely high quality standards employed by VILLOSIO MOBILI, from the purchase of the wood, to the design and subsequent manufacture of the furniture, to the delivery to the end client.

This is an additional guarantee that VILLOSIO offers to its customers.

WHAT DO WE DO